Wyvern was offered the franchise to broadcast to Hereford & Worcester, directly in a phone call to Sir John in his Hereford home, from the IBA (John Thompson). We were given a few days to accept or reject the offer and we had to keep it a secret over a weekend before the press release embargo was lifted.

Most of the directors had a copy of this picture, it was taken at a full meeting of all directors, and others, at The Falcon in Bromyard where we often used to meet. The meeting was to inform everyone we’d won the franchise, and decide the on-air name of the station, one argument I won for a change. We never actually went to London the meet the IBA again following our 2nd interview during the selection process, and the other group were not invited to the London IBA for a second interview. 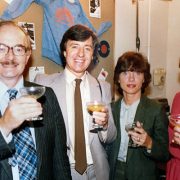