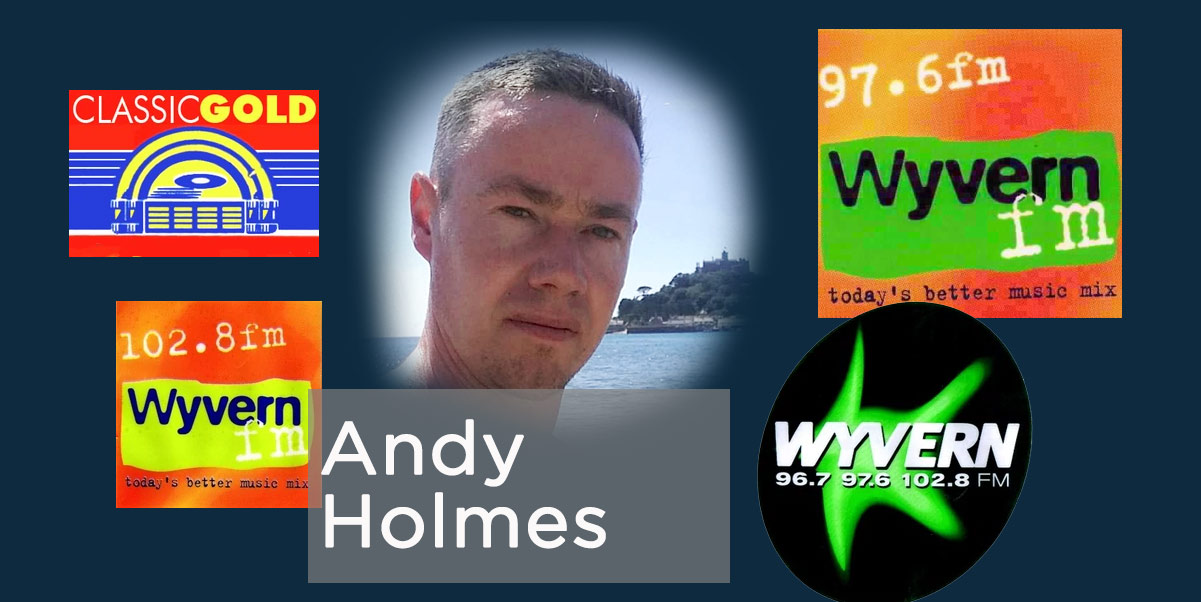 I have MANY memories of Wyvern, having moved to the Two Counties aged 7, it was probably the station (along with BRMB) that inspired me to get into the industry in the first place. So to work for the station was a massive thrill. I’m now Politics Reporter at BBC Three Counties Radio in Dunstable.

Here’s a few… In the late 80’s, I remember the buzz of Jason Harrold reading my name out on the station when I’d asked for a mention. Plus I think I won some CDs on the Shaun Tilley/Layton show a bit later. I remember listening to Trevor Owens on Wyvern, and he gave me my first broadcast work with the BBC in 1998, and to this day I still owe him a lot, and get his advice on matters relating to my career! That’s the sort of stuff you don’t forget and you try and help others as you get older yourself.Before I actually worked for Wyvern, I was part of Big Rich’s gang at Classic Gold (late 98-01 I think) as a teenager. As I remember,

Before I actually worked for Wyvern, I was part of Big Rich’s gang at Classic Gold (late 98-01 I think) as a teenager. As I remember, he’d got a tape of me from my boss at the fast food restaurant I worked for and I heard nothing for probably 18 months and thought my chance had gone…Then he rang me at the Worcester Evening News (where I then worked) out of the blue on a Thursday asking me to do a show that Saturday…Which of course I did, as you don’t turn down those sorts of offers, and almost twenty years on I know that’s how a lot of people get their chances!

My first show in Nov ’98 was trouble free until I went out into reception at Barbourne Terrace (can’t remember why!) but then couldn’t get back through the door as I’d not noted down the code! This was in the days of CDs so I was VERY lucky that Paul Masters happened to arrive at about the same time to let me back through the door, otherwise, my broadcasting career could’ve been over before it began!

About a month or so later, still with Classic Gold, I remember hosting the last show for that station at Barbourne Terrace on a Sunday afternoon, whilst the rest of the station staff were moving the kit out to the Portakabin at Otherton Lane pretty much around me as I spoke!

I must mention Muff of course, who in many ways IS Radio Wyvern…I remember being quite scared of Ginny, but Muff was lovely and I enjoyed seeing him again at the 25th birthday party in ’07.

Like most wannabes back then, I’d have been the kind who would’ve sent regular demos to the various PC’s at the time, trying to get a job at Wyvern. My broadcasting career took me to various stations around the Midlands and the South West before I finally came home to Wyvern in 2004 when I joined the station as a Journalist when Simon Monk was PC.

Of course, by that point, Wyvern was under the GWR spell so it was all about “Better Music Mix” straplines and networked shows like Late Night Love and Core Control, but the daytime lineup was Stoney in the Morning, Tony Fisher and Ed Nell with Jo Jo on Early Breakfast. As time went on Nick Jordan took over from Tony on mid-mornings.

Soon after I was moved to regular breakfast newsreader making me a part of the breakfast show, which included rapping the sports news for a while each Monday! I also posed nude for a charity calendar for St Richard’s Hospice with a couple of the other presenters!

I was a big Neighbours fan back then, and Dr Karl Kennedy from the show was doing panto that year in Malvern. I was gutted when he came in to be interviewed but I had to take a snoop session off the News Editor at the time, and the closest I got to meeting him was seeing him through the window!

The Santa Fun Runs were always interesting, especially when I ran them but forgot to bring my own belt and ended up being slowed down by having to hold onto my trousers! PJ Day as well, raising so much for St Richards Hospice.

I’ve always had presenting ambitions, and after quite a bit of arm twisting, I got Simon Monk to let me present a show (I think it was the Hot 30 Countdown/Download Chart or something similar on a Saturday morning) when the rest of the station went to watch Worcestershire play cricket! Luckily I didn’t take the station off air, so I got regular cover work off the back of that, and I think by the time I left Wyvern in 2008, I’d presented each of the day time slots, plus all the weekend local ones, something I’m still quite proud of.

I was at the station from 04-05 on a full-time basis, then freelanced for the next three years whilst studying for a drama degree at Worcester Uni.

It’s probably the most social station I’ve worked for and regular curry evenings and nights out stay in the memory from those years, especially when Simon “The Gaffer” Monk was in charge.

Other staff from my full-time year would’ve been Adam Hood (production), Geoff Burkimsher (copywriter), Jonathan Dunbar and Steven Davies (news), John Crutch, Emma Main, Claire Saytch, Mark Wright, Jo Hiley (all sales) and then of course there’s the Black Thunders like Yve and Stacey amongst others who I’m still in touch with on Facebook and of course Tony “AJ” James. And who can forget ‘Auntie’ Jayne Collins!!!

When Simon moved to EMAP, Rick Simmonds took over for a while followed by Mark Watts for slightly longer.  By that point, the likes of Kim Shaw, Andy Luckman, Dawn Easby and Paul Ellery amongst others I remember were part of the lineup, with Andy West and Vicky Breakwell doing news (I think!)…

During my freelancing years, I presented, probably did some news, produced for a while, worked as a Black Thunder as well as doing a few bits on stage, including Upton Water Festival for about three years I think.

I stuck around long enough to witness the move out of Barbourne Terrace up to Kirkham House but if that was 2007, I was gone by summer 2008 as I’d graduated and then moved to Cornwall

( Some terrific memories here Andy – it would be great to hear from the many people mentioned in Andys post to add to the breadth of the Wyvern story. SS )