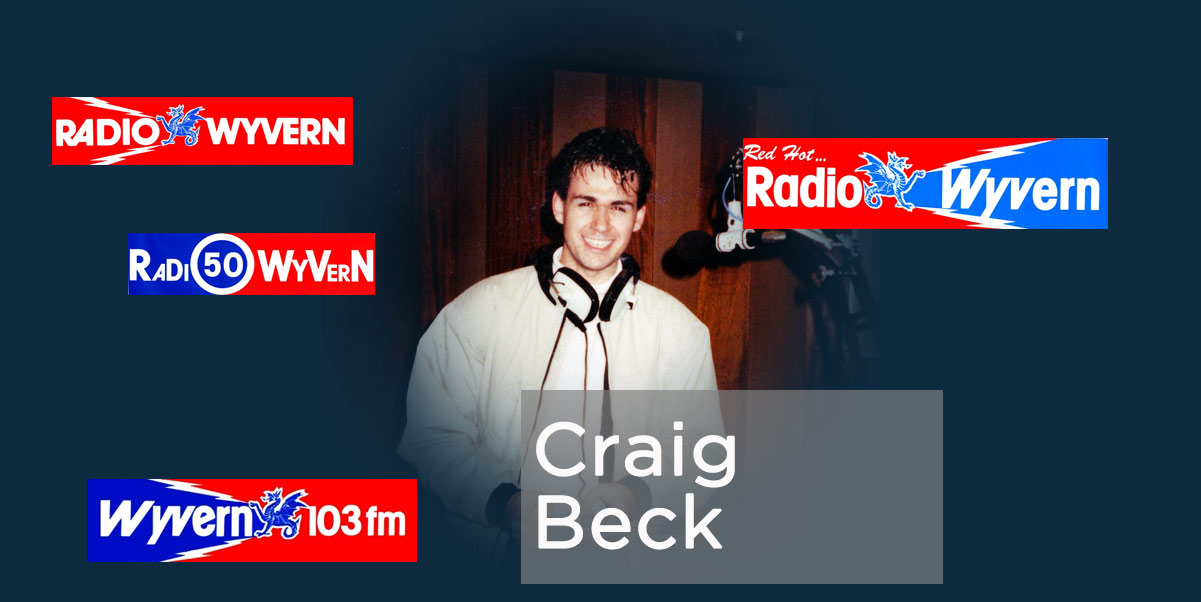 I was seventeen years old and had received approximately 50 or so rejection letters from radio stations around the country. The theme to the replies was similar; not enough experience, not quite ready, you have potential – come back in a few years.  Then one day my mum called me downstairs to take a telephone call. I asked her who it was and she said ‘some posh sounding woman called Stephanie.’

The woman on the phone explained that she was calling from Radio Wyvern in Worcester. She said that ‘The Boss’ wanted to meet me and would I be willing to come down for a chat? I said yes immediately, and then I looked at a map and discovered that Worcester was a four-hour drive from my hometown of Darlington. I had only passed my driving test a few months earlier, and the furthest I had ever driven before was to my friend’s house, 5 miles down the road.

The big day came, and I got dressed into the only suit I owned, the suit my parents had bought me for my Gran’s funeral. I jumped in my little Mini and set off on the journey. This was before the days of mobile phones and sat navs. I got lost a couple of times and ended up being fifteen minutes late for my meeting with ‘The Boss.’ This was not a good start, as I was about to find out.

The Boss was a balding Geordie by the name of Norman Bilton; he eyed me suspiciously as Stephanie ushered me into his office. I sat down in the chair facing his desk, and his first words to me were ‘who said you could sit down’? So I stood up again and apologised profusely. He stared at me for what seemed like a fortnight before he said ‘you are late and you look a mess, your suit is crumpled.’ I tried to explain it had been a long journey but he interrupted almost straight away and asked ‘where is the free car you promised me’?

I thought he was mental.

“I am not sure what you mean,” I said

Norman put his glasses on a picked up my letter from his desk “It says here, items enclosed 2, CV. So I presumed you were bringing me a free Citroen 2CV”.

This was apparently a joke of some sort, but the problem is he had a face as serious as an undertaker. I didn’t really know how to take him, and I never did work that out. He put the letter down and looked over his glasses at me and asked ‘do you know why you are here?’ I said I presumed he had liked my demo tape and might have an opportunity for me. He smiled and said ‘no, your demo was terrible. You are here because you wrote to me on bright yellow paper – nobody has ever done that before. It made me think you might be a little different from all the other wanna be’s’. I explained I had only done that because I run out of white and he looked decidedly disappointed.

It was the weirdest most stressful conversation I had ever had with anyone before or since. However, it ended with a job offer of sorts; The Boss said ‘I am not sure you have what it takes but you can come for a month, and we will see. I will pay you £100 a week, start on Monday and we will find something for you to do.

It was the least flattering job offer I have ever had, but I was over the moon with it. Over the next eighteen months at Radio Wyvern I would present every show around the clock, service the cars (despite not having the first clue what I was doing) and look after the vending machine – all these things fell under my remit for the first year.

When Jason Harold left the station, my big opportunity came. The Boss said he was going to give me a chance on the Breakfast show, but he didn’t trust me not to upset his friend in the pub so he would come in with Stephanie each morning and produce the show. This meant I would sit in the North studio while The Boss and Steph would sit in the South studio shouting at me every three minutes over the intercom.

The behind the scenes conversation over the intercom would go like this:

BOSS: Talk about it being the first day of spring and do a phone in asking if anyone has heard a cuckoo yet.

BOSS: Yes, you bloody have to.

I would do what the boss told me, using the exact words and phrases. To my ears, it sounded like I was on acid.

BOSS: What the hell was that? That was the worst radio I ever heard in my life. Do it again.

BOSS: Are you stupid? Do the link again but this time do it correctly.

I think I managed a week on the breakfast show before the Boss declared it a disaster and I was dumped back repairing cars and vending machines.

When I think back over my radio career, I think some of my happiest times were at Radio Wyvern with Sammy & The Boss. I used to grumble about it at the time, especially as I managed to get myself suspended three times. Although in hindsight it nows seems more than a coincidence that I always seemed to get pulled off the air for a week when Dawn the receptionist had booked a holiday, and they needed a replacement receptionist.

All that said Radio Wyvern was true personality radio. You could be who you wanted to be. There were no scripts or liner cards; you went into the studio with four hours of pure fun and excitement ahead of you. Great days with lovely people.

Craig you were fantastic for 17 and have made so much of the opportunity. I have found and added the Spitfire car and story at the bottom of this post. SS 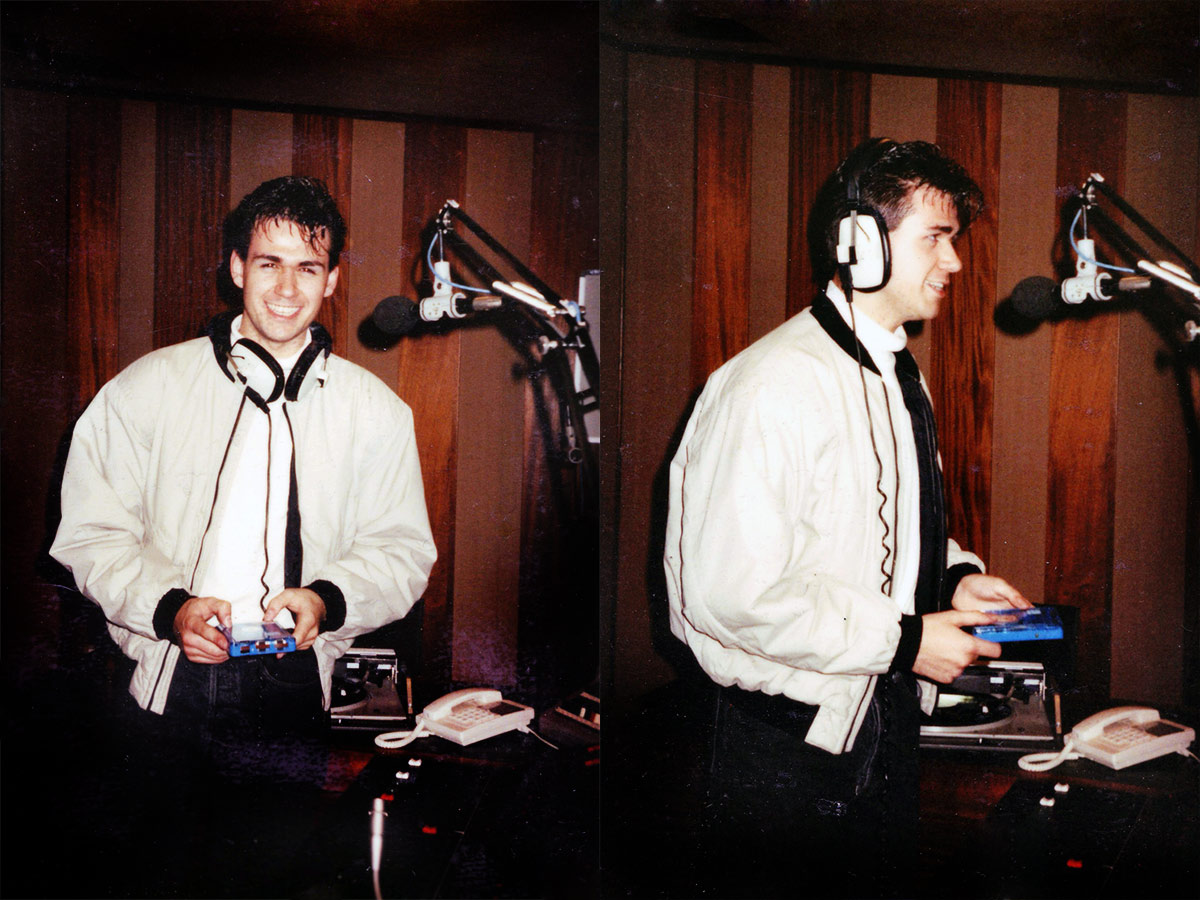 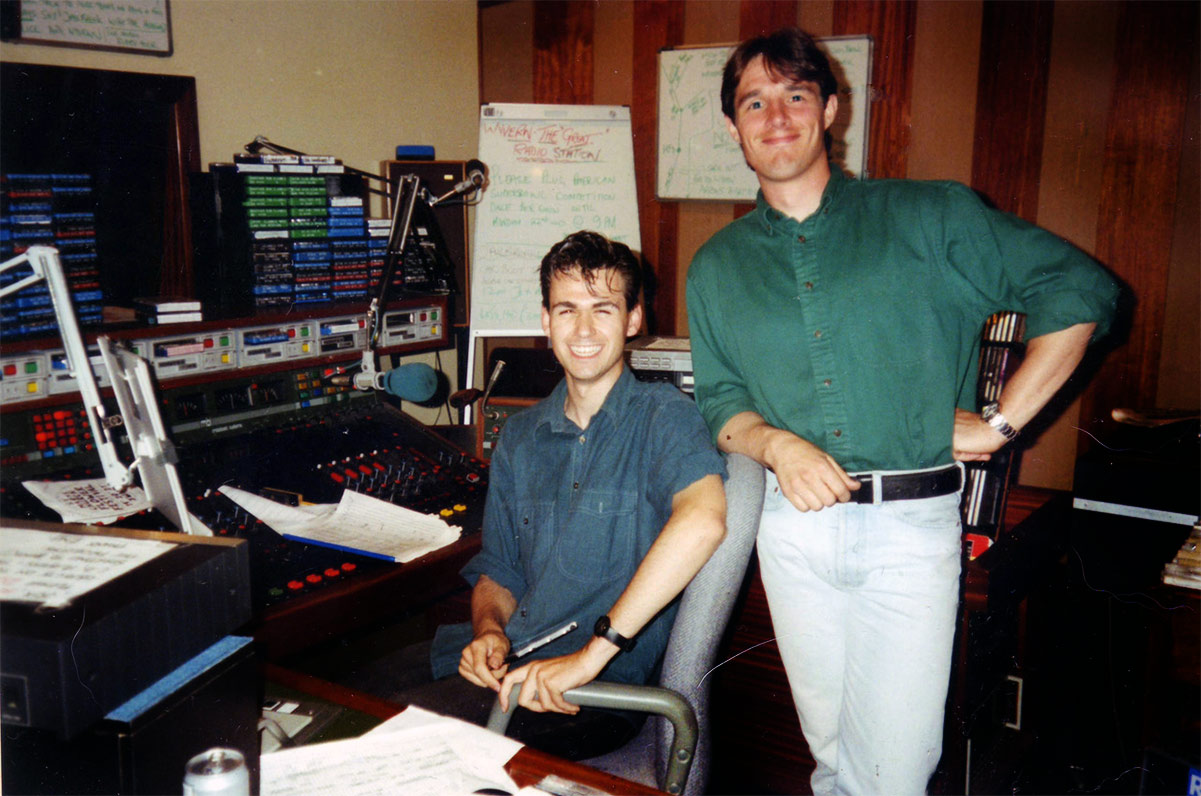 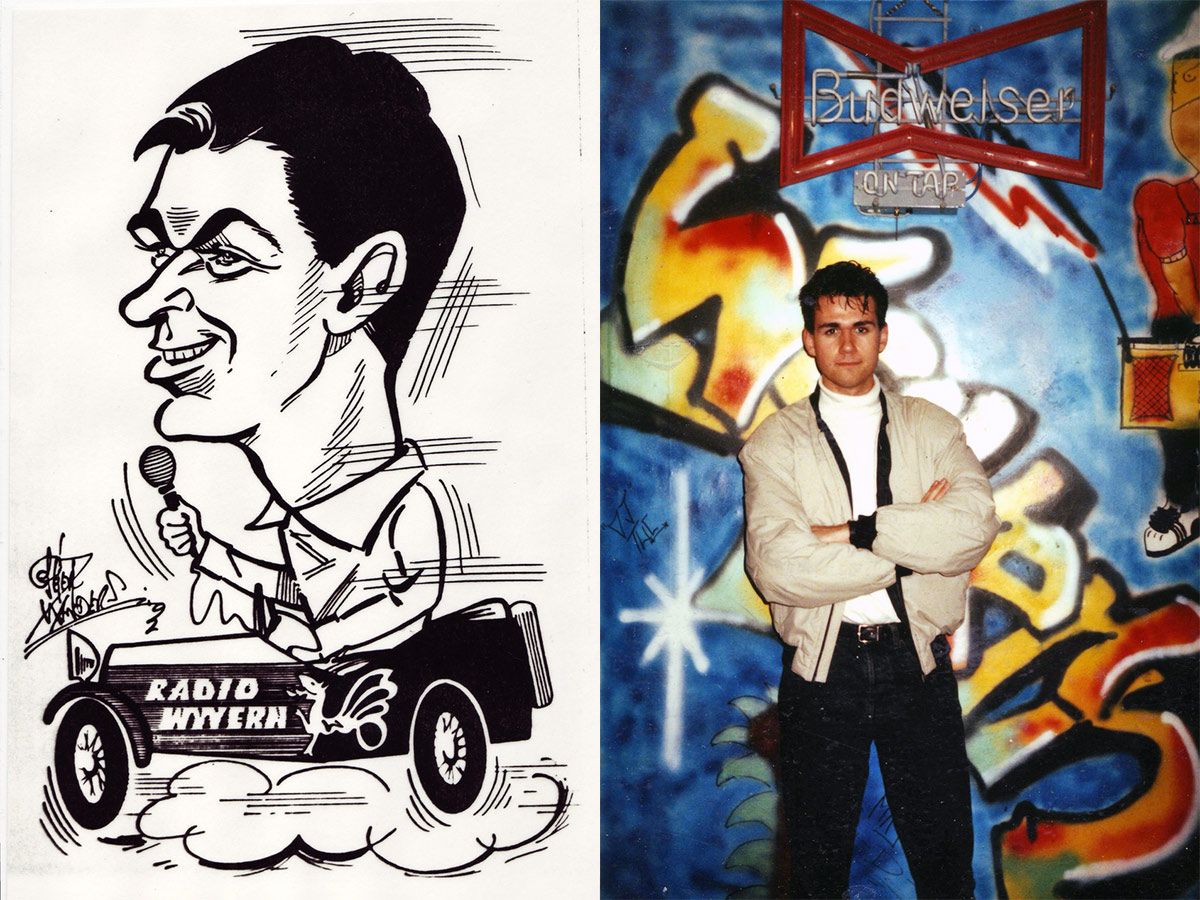 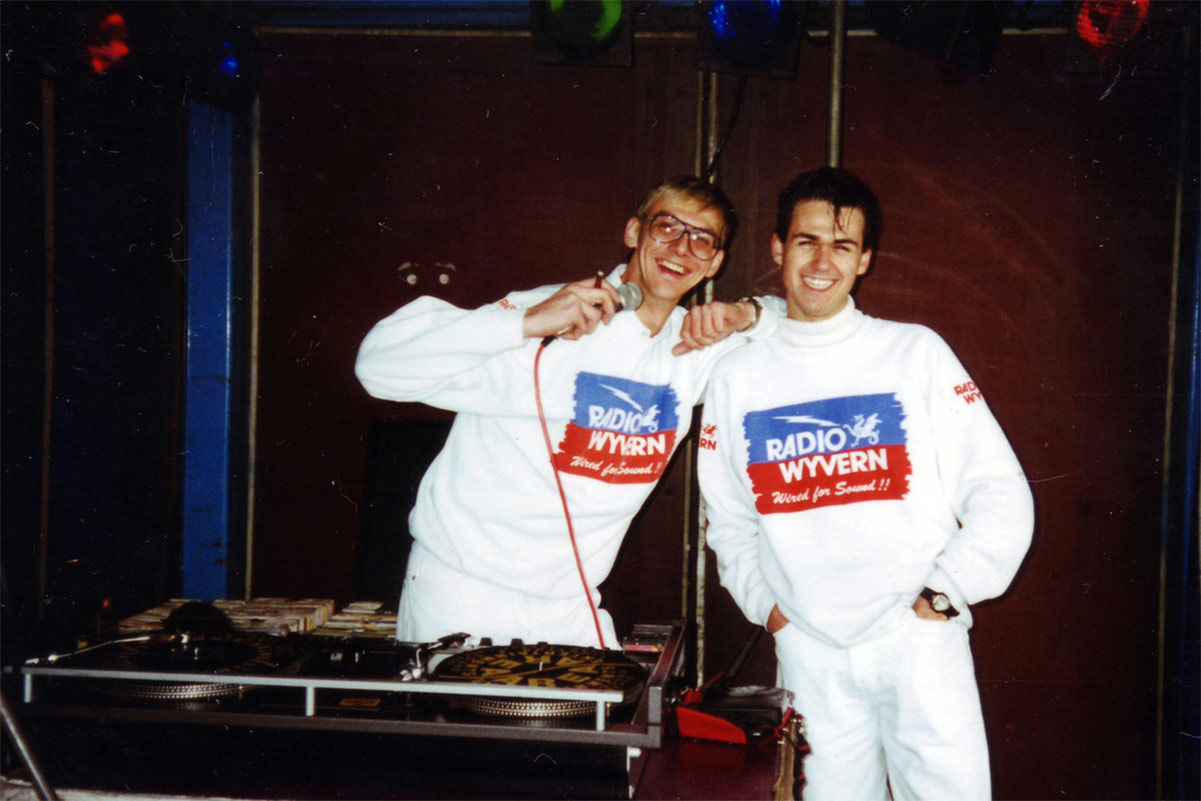 Do you remember the old Wyvern Spitfire car?

Norman was trying to save money (as usual). The breaks were a bit dodgy (read death trap) and he told me to check the brake fluid level before I took it out. One day the level was about half what it should have been so I bought some brake fluid, gave it a good shake (I didn’t know you weren’t supposed to).

Giles and I were racing back from a charity event in Hereford (I think) and we came flying over Fromes hill only to be met by a broken down car. I slammed on the breaks and absolutely nothing happened. We both screamed for what felt like an hour and we ended up in a ditch on the side of the road with the nose of the car buried in a bush. Thankfully there was no damage but we did nearly die.

I slammed on the breaks and absolutely nothing happened. We both screamed for what felt like an hour and we ended up in a ditch on the side of the road with the nose of the car buried in a bush. Thankfully there was no damage but we did nearly die.

Thankfully there was no damage but we did nearly die. 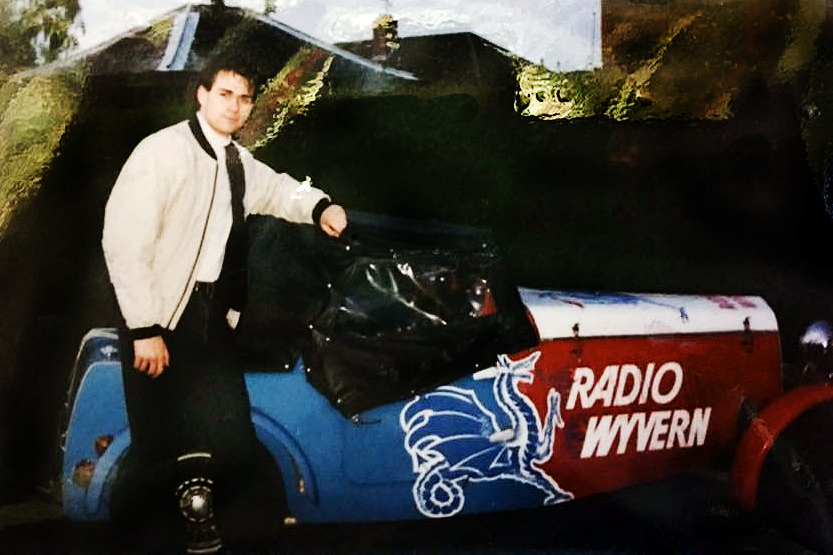