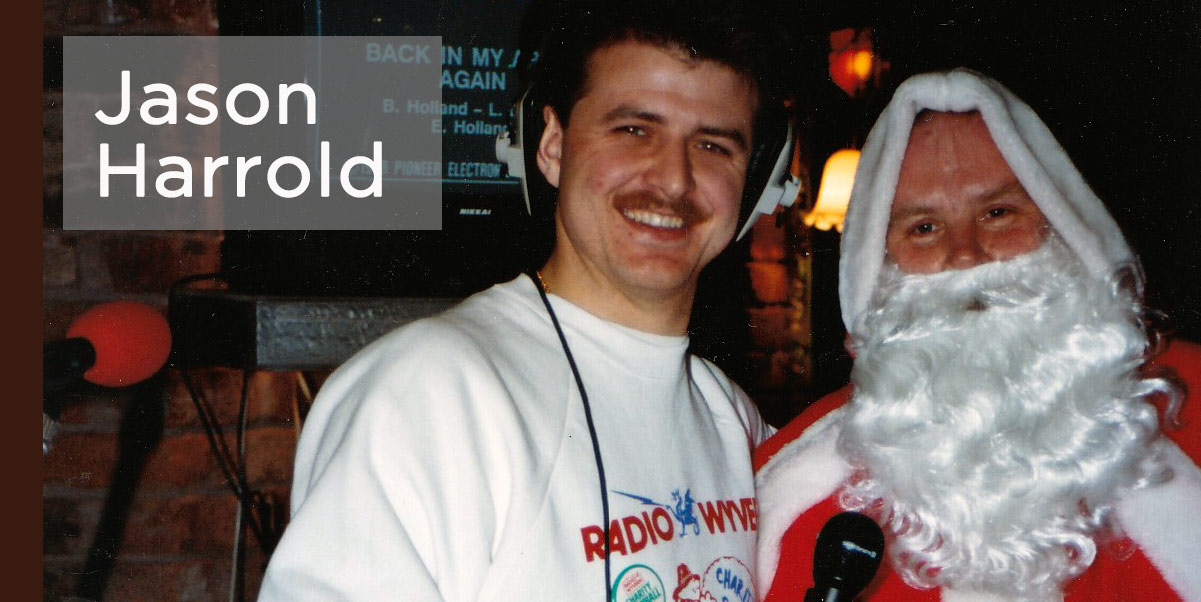 It’s lovely when radio shows are slick and smooth and sound effortless. As any presenter knows there are times it is anything but. It’s like how a swan glides, quite serenely, but you know underneath that the feet are paddling away. Sometimes radio is like that and then sometimes the pond is frozen and you slip and fall on the ice. Of the two on-air studios at Barbourne Terrace, it was the one that backed onto the car park that gave me my most memorable times.

Maybe a swan was the wrong animal to use as an analogy, as it was more of a horse unseating it’s rider.

Early on in my days at Wyvern, I remember being on the evening show and falling foul of the hydraulic chair. I’m not sure how long the seat had been with the company but let us say it had had is fair, or unfair, share of bottoms perched on it. I remember a song ending and starting to speak then there is a kind of noise that wouldn’t have been out of place in a sci-fi programme coming from underneath me,  which was strange because I hadn’t had any tea. The noise was followed by me being lurched forward and ending up with hands gripping the edge of the desk with my knees on the floor. I had to be honest and say ” I am sorry my chair seems to have exploded” and swiftly moved on and moved chairs, luckily finding one before the music stopped.

I’ m sure I’m not the only one that happened to. If my memory serves me correctly I think Stuart Ellis also suffered at the hands on the hydraulic harridan.

Those studios at Barbourne Terrace were, by comparison to other stations I have been in, cavernous. Mind you that’s no excuse for throwing things around as I found to my cost.

Someone kindly sent me a stress ball.  I don’t remember feeling particularly stressed or requesting the ball but somehow it ended up in the studio with yours truly. The great thing about the ball was although it had foam on the outside, inside it had a noise effect that when it was thrown against a surface it made the sound of glass smashing. I thought it was smashing too. Well, I did until I threw it. In a demonstration to our news editor, I stood up from my chair and threw it against the studio wall. Now instead of the ball behaving and bouncing straight back to its thrower ,a la boomerang,  it decided to hit the wall. Not the flat wall, oh no. The part of the wall where the hessian covering met the strip of wood, right on the angle.

So instead of bouncing back, the ball, which for some reason now seemed to be in slow motion, took perfect aim at the turntable that was playing the song the listeners were hearing. Well, they heard a bit of it as the arm was hit on the full before making the needle expell one of those scratch noises that became so popular on rap records before  a couple of seconds – even though it felt like hours – silence greeted the carnage . After the initial shock and stifled laughter I managed to  sit down and open the mic and carry on , swan-like.

However unlike the chair I wasn’t about to admit the cause of the disruption.

I don’t know if you ever saw the episode of Top Gear where the 3 Amigos take over the Drive Time show on BBC Radio Sussex . Of the three only Richard Hammond had any radio experience . There is the bit in the film where he goes off to the loo and through the speakers he hears the show start to go wrong and as he has other matters in hand there is nothing he can do.

When I saw that I knew what was about to happen because I felt his pain. It happened to me in the Autumn of 1988. Why oh why when people design radio stations do they put the loos so far away from the studios?. Some places I have worked have been on different floors . At Wyvern we were on the same floor but through 5 doors was The Long Walk To Weedom .

One morning whilst presenting breakfast sometime after 8 am and 3 cups of tea, nature duly called . As is the way you look for a record with a suitable time frame . The song that would see me through was to be a big favourite ; Yazz – The Only Way Is Up. Great song at that time of the day. It was a song that was a favourite with our listeners and had had plenty of plays on the station. And it was also long enough to cover my, ahem,  absence.

Actually, it turns out I could have weeded the garden changed the oil in my car and had a bath because as the song played and I was, shall we say, midstream, the damn record stuck.

Yes good old vinyl -the stuff that everyone is raving about once again -let me down. I -in that 2 and a half minutes – had made my own remix without even trying. To make matters worse there was a speaker in the bathroom and every stick of that song made it seem like there was a litre of fluid left within me.

I eventually returned to pandemonium on the telephones. 3 Iines were going as was the XD and the internal white light and you know what that meant !

It’s funny how music  when we hear it can transport us to various times and places . Hearing Yazz just gives me flush cheeks.

I am so glad this wasn’t actually me but I was there when it happened . It happened to one of our newsreaders. And it can happen to anyone . My admiration for those who have to lifts words off a piece of script or off a screen and get the correct tone, inflection and intonation has no limits. It takes practice . And sometimes I guess if you are against the clock preparing a bulletin you sometimes don’t get the chance to read through the scripts thoroughly.

Anyway this one week  I was covering for Sam as he was off on his hols and it was time for a local lunchtime bulletin.

I will protect the name of the guilty party who almost had me crying with laughter .

Why do the slip ups always happen on the serious stories ?

The story was about an injury a gentleman had suffered . I don’t know whether it was a deliberate attack or an accident but the man in question needed treatment.

The line should have read and probably did on the script  ; “……..he was taken to hospital with a four inch cut in his head…..” . Simple enough you may think. What could possibly go wrong with that bit of copy?

Well how can one put it? Lets say that the letter n was moved from one word and added to another .

The bulletin duly ended, we were into the first song and bearing in mind there were thousands of people that would’ve heard that – my colleague, realising the slip of the tongue turned to me and said: ” You won’t tell anyone will you?”

( Fabulous – glad you didn’t miss that one out, and where is the aircheck when you want it! SS )