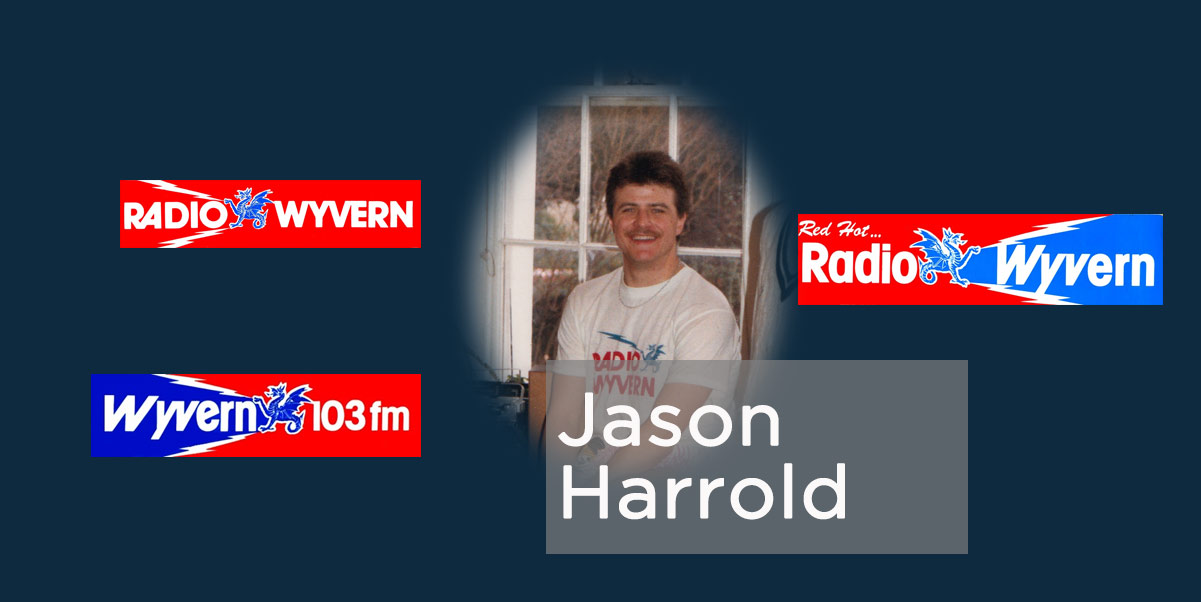 What Simon Cowell does is nothing new. New Faces and Opportunity Knocks were to name just two. Radio Wyvern also dabbled in the new talent stakes and I am living proof. I was the winner of the second Search For a D J contest. A kind of “Decks Factor ” if you like.

Anyway, I took the prize of four one-hour shows as well as a framed memento , oh and a nice little cash prize too after which I thought nothing more and shuffled off back to my day job.

A phone call a few days later and I was back doing some cover work then the opportunity to join the team proper doing the evening show 6 -9 pm . One of the happiest calls I ever received if I am honest, well apart from that one from the clinic that one time but that’s another story.

The first week was in the Summer of 1988 and I am blown if I can remember the exact date. I am pretty sure that it’s nothing to do with age.

Whatever the date it was a full on a week which started with a bout of food poisoning which gave the listener a chance to enjoy some of the 12-inch singles and longer tracks we possessed in our library.

It was also the time of my first taste of outside broadcasting. Wyvern teamed up with the nice people at Phillips with their moving sound bus. Fully kitted out with a radio studio I headed out early to e West Midlands Safari Park in Bewdley.

My duties for the morning were to take a mobile phone -which in those days were the size of a normal telephone handset but the battery was the size of that you’d find under the bonnet of a car, the phone resting on the giant square box- and set off around the park.

My guide and driver was Bob Lawrence who is now quite an important fella at the Safari Park. We set off in his Land Rover with the phone fully charged ready to dial back into Sammy’s show when we saw something interesting.

After seeing a stray kangaroo and a reuniting it with its mother, we encountered a giraffe. Now those giants are possibly my favourite animals and I am pleased to say I think the giraffe felt it was mutual. As I spoke love to Sam on the phone the giraffe bent down its long neck and put its head in through the open window. Who knew they were so affectionate creatures because even though it was our first meeting he wanted to use tongues. Nearly all 16 inches of it. You know when your mum used to say “you’ll feel the length of my tongue”? Well, it has nothing on a giraffe. There was no second date. That done we headed off to the tiger enclosure, a beautiful big cat. The great thing about being with the chief warden was that we could get out of the car. Yes, in the tiger enclosure. It was at this point I was thinking how safe being a baker was when it was time to talk to Sam on air again. In the hut behind where they kept the tiger was a little walk way for the keepers and wardens to enter. All that separated me from a prowling giant cats paw and jaws and those teeth you see in nature programmes was a bit of metal fence, and at this stage, the Tigers looked quite placid I thought. Sadly there seems to be a fault with the filter from brain to my lips and my big mouth imparted this information down the line to my colleague. ” it’s ok “said Bob helpfully “I’ll liven them up”

His method was to aim his heavy boot towards the aforementioned metal fence and begin kicking it. The tiger as you can imagine reacted like anyone who sees their back door being kicked and tried to bite the foot that was causing the disturbance.

I have no idea what it sounded like on air but I was very glad to make it back to the O.B unit, via the toilet.

That first week taught me how privileged it was to do the job we do. We get the see behind the scenes at many places. After the tour of the Safari Park I flew in helicopters , a light aircraft between Shobdon  and Staverton ride on the passenger board , I won’t call it a seat, of a racing sidecar  and train with and get on the pitch on a match day at Edgar Street, the home of the then Hereford Utd .

Happy days and even happier still the giraffe still sends me a Valentines card . I know it’s him from the amount of saliva used to seal the envelope 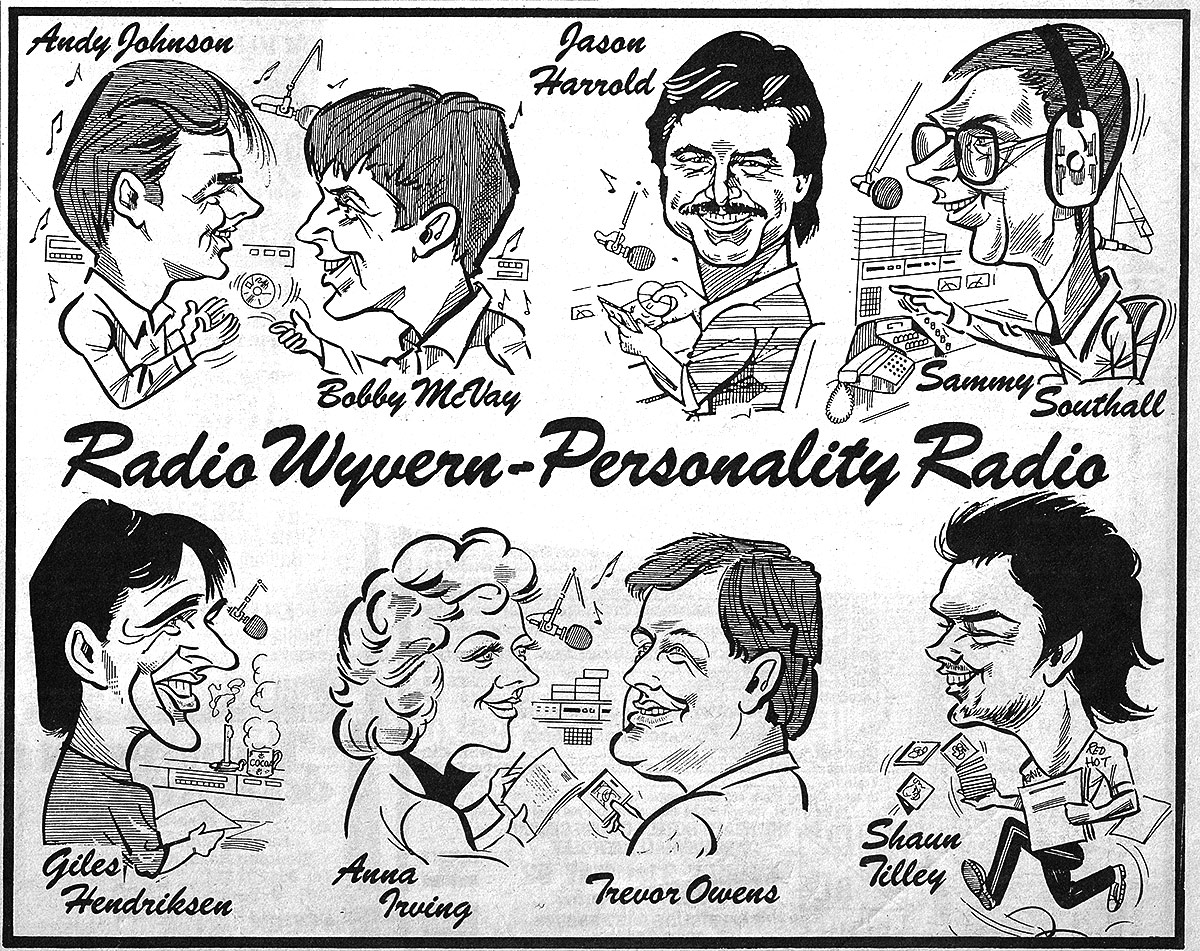 My first programme. Sometime in May 1988. 9 pm start time and I was on for an hour. I was then at Wyvern until 1992. The first of my four shows as part of my Search For a D J prize. Cassidy Jones hosted the evening show and was generous in his talk ups as well as some gentle leg pulling. I laughed them off but my major thought was what my friend Steve told me in the pub the week before. He kept repeating the IRN outcue  ” Independent Radio News ” followed by a large raspberry as if to mimic my nervousness. I have to say he wasn’t far from the truth.

At 21.03 the newsreader did the outcue , I played a station jingle whilst remembering to pull down the fader and started my first song; Self Control by Laura Branigan , and I was off and running on my own radio show on a proper station Having been on hospital Radio for 3 years I knew about being behind the mic but I still felt it was a huge step up .The overwhelming thought, however, was that it was a complete thrill to be sitting there and it’s a feeling I am pleased to say has never left me.